First view of Frankenstein, a figure of much importance to come.

A child's playroom of "safe" monsters, the friendly Frankenstein flanked by the werewolf and a wall of torture implements.

Dracula, another gentrified classic monster of later significance in the film, gets namechecked here via his theatrical poster on the right. Love how Joey thought to put garlic over it. That would really stink in real life.

Some more kid stuff, just to make clear that this is a child's room. Apparently Joey's other hobby besides horror is NASA. Um, sure.

The extending hand which inspects the rubber spider is the first tip-off that yes, we're in some sort of "slasher" sequence. The roaming camera is in fact of the first person John Carpenter's Halloween variety immediately and incessantly imitated by lesser filmmakers, and the black gloves are a slasher trope going back at least to Sergio Martino's giallo film Torso (1973). The year of this film's release, 1981, was of course the peak of the slasher craze. Halloween II (1981, Rick Rosenthal) certainly wasn't above repeating the ol' killervision seven months later.

What's enjoyable on repeat viewings is the knowledge that Joey is simply considering his options on hand to scare his older sister.

The beautiful Elizabeth Berridge, signaling to us that there's at least one more homage at play.

Anyways, how the heck did people not catch on to the self-reflexive nature of this film? It literally winks at you from the beginning! This moment of a puppet head seemingly coming to life still gets gasps (and scoffs of relief when the camera pans down to the trigger) even today. John Beal's score turns ominous when the hand grabs the knife from the wall, which is an interesting choice. Hooper seems to be betting that although this is obviously a child's room, that might be a real knife on the wall being taken by this unseen person.

Between these shots Elizabeth Berridge casually bares her chest. This is pretty shocking even to horror fans, who are undoubtedly the targets of the surprise: how could the lead actress of the film possibly bare her breasts? Are not bare breasts the exclusive province of the nubile models filling the horror/slasher film's body count before the Final Girl finally kills the killer?

This is what my colleague JR calls The Funhouse's "wet blanket" approach to "a forgoing of slasher cliches." Not that Siskel and Ebert were about to single this film out and champion it when they were busy at the time making their careers vilifying the subgenre. Even before the sequels, Halloween was not yet regarded as a classic and barely regarded as a respectable picture, which is why Hooper's synthesis of Carpenter's most famous directorial flourish with Hitchcock's most famous sequence was preemptively one hell of a compliment.

Hooper recognized that both Psycho and Halloween were, as JR puts it in his review, "the progenitors of nasty modern horror" and in the splatterific year of 1981, The Funhouse came as something of an unwanted reality check about the rapidly narrowing margin between the accepted escapism of the genre and the brutality of it's content.

Shock: Let's talk about the opening a bit. You throw a knowing wink to both Carpenter's Halloween and Hitchcock's Psycho. Obviously, you were cognizant of the type of film you were doing, but you make it entirely your own which makes the opening homage bit peculiar.

Hooper: It was my idea to do them and I wasn't sure if it was the right thing to do. I didn't want it to appear like I was ripping John off. But it came down to immediately letting you know you're watching a genre picture. In particular, too, it helped make the film a little safe. And I wanted that. Because I wanted the color and the fantasy, to build up to this moment where this person is wearing a Frankenstein mask is actually the strange anomaly.

Even more factors completing the Halloween parody to the fullest: the perpetrator is the girl's little brother, and the film's director makes sure we know he knows that she's in a state of undress. 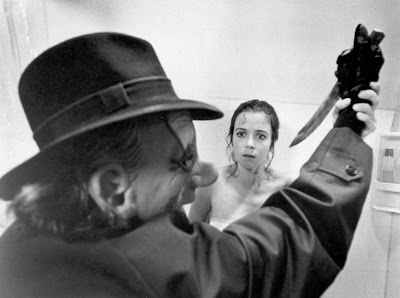 Great acting from Berridge here. Somewhere in her mind she knows that she isn't really being attacked, yet her initial fear and basic self-preservation instinct doesn't want to take that chance.

Hooper is really an actor's director - more than his more commercially successful "Masters of Horror" contemporaries, Craven and Romero et all - and as JR mentions in his review, he has a knack for capturing the "invisible harmonies" in his actor's faces. This right here is one of my favorites: sheer terror melting into indignant rage.

"The boy is a straightforward image of the child not as horror-object but as horror-audience, and if Hooper's audience finds him as harmless as their own presumed self-image, they will learn, as the boy later does, that there is more at issue than fun, that these games are connected in a meaningful way with genuine rape and murder in an unattractively perverse context. This is an image of the child that critiques the child images of The Exorcist, The Omen and Halloween rather than reinforces them, and scorns utterly those in Prom Night and its ilk."

The POV camera becomes reversed to the sister. I think it's in this moment that people's adrenaline really starts, because now the parodies are over and with them the safety of predictability. John Beal's score has a small resolution when Joey is unmasked, but has now picked up again and is building steam.

Something near the foot of the bed moves, which isn't really playing fair on Hooper's part as we'll soon see.

Contrary to the expectations assumed by the film's title and especially following that great opening credits sequence, The Funhouse rarely exploits its many dolls and puppets for shock or jump scares, choosing instead to use their eeriness for atmosphere. This moment with its sudden zoom is the only blatant attempt, and I can certainly remember being chilled the first time.

Amy is apparently quite susceptible to phony scares, making her the perfect victim for younger brother Joey.

"Just for that, I'm not taking you to the carnival on Saturday..."

"...And while I'm there tonight, think about this. I'll get even. You won't know when
or where, but I'll get you so bad you'll never forget it!"

OFF SCREEN TV:
"The Bride of Frankenstein..."

Franz Waxman's Bride of Frankenstein score swells, and in conclusion of the film's first sequence Hooper has effectively paid respect to the entire history of the horror film. As JR wrote in his review, The Funhouse is "the soft-spoken predecessor to Scream" and one of the greatest movies ever made about the mad desire to scare and be scared.
Posted by Unknown at 1:41 AM