Joey's first in a series of escalating table-turning adult scares for the night is a cheap chair jumper, probably as it should be. The Funhouse gets a lot of quiet scenes from his inclusion in the story, which is a purely symbolic and emotional one.

Our first view inside the carnival is the mingling of society's fringe and the bourgeoisie suburbanites who visit their theater for thrills. Further away from Amy and friends in age, the mother and her children don't even see this guy and he shambles pitifully across Hooper's first time widescreen composition. Then in the same shot we see the group enter.

Amy bumps into the guy, the first of her escalating confrontations with the dark side of adulthood, and moves on. It's probably a coincidence, but there's a father and daughter passing by as this happens. Credited sensitively as "Geek," David Carson will be seen several more times in the background of the film, as will some of the speaking roles for the other carnival denizens. This is one of Hooper's movies which can be called Altmanesque in its simulation of an interacting community of characters.

The costumes of the carnival extras are perfectly drab, and the bold colors of the lead actresses really pop out even amongst the color of the carnival itself. Hooper pays a lot of attention to costuming for characterization and his dead teenager movie is no exception - Elizabeth Berridge's dress is perfect because it makes her look like Snow White. Largo Woodruff's star-covered purple shirt and red pants are stylishly loud without being dated, and the guys are preppies in blue jeans. There's a timeless quality to these clothes.

There's also timeless quality in the film's lengthy visitation of the carnival, that familiar seedy antique and institution of show business. Here's the first of many familiar distractions and another example of Hooper trusting his actors enough to tell the story through their reactions.

Here's a lobby card of Amy inspecting a different selection of game prizes and reaching for what looks like a shrunken head. This scene didn't make it, although finding a disturbing anomaly amongst cheap artifice is what the film's all about. 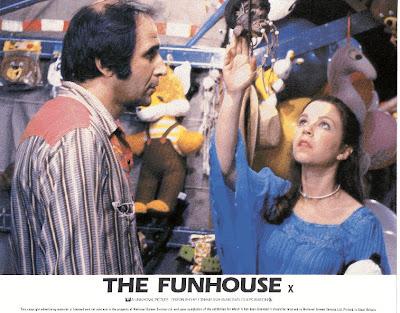 "I admired a quality about the Tyrone Power movie, Nightmare Alley, and my memory of it was it was set at a working carnival. It wasn't, but I always wanted to do a carnival movie."

"It was a full-on carnival. And I wanted to make sure we used all of it. You always saw segments in carnival movies - the Ferris wheel and what not - but the carnival here was a character."

Shock Till You Drop Hooper interview

This may be the only montage in Hooper's filmography. He had a lot more location terrain to cover on The Funhouse and more reason to cover it than any of his other work.

The Brass Ring, which I've yet to see anywhere outside this film as they're extremely rare these days.