"What're you doin' around here?"

"You wanna lift? Huh? You wanna come for a ride?"

"...I was shooting in the Teamsters strike. Uh, the transportation captain was murdered...and then people were taking pot shots at the studio, driving by...in the midst of the cocaine wars, so."

A pattern of scares emerges here for little horror movie loving prankster Joey, finding out as Bruce F. Kawin put it that "there is more at issue than fun, that these games are connected in a meaningful way with genuine rape and murder in an unattractively perverse context." The Joey who play-acts scenes from Halloween and Psycho to scare his sister, has just had some jaded old man pretend he's going to kill him. Who's laughing now?

"These are all creatures of God, ladies and gentlemen..."

"(Kevin Conway) would invent lines, too. 'All mistakes, creatures of God not man' he'd say, asking how it was. Right on, Kevin. Right on."

"Something is alive in the Funhouse!" - film's tagline

There is a short swell of strings from John Beal here as if there's something terrifying about Amy's eyes meeting the Freak Tent Barker's. This is confusing the first time viewing the film and still sticks out as irregular even on repeat screenings. The significance seems to be the breaching of a barrier between wide-eyed spectator Amy and the dark mysteries on the other side of the show curtain. Kevin Conway plays two other barkers whom we'll see in the next scene (including the Funhouse barker) and Amy also has strange silent interludes with them both.

As Buzz whisks Amy inside, the man who takes their tickets is Herb Robbins, "director of the apparent cult abomination 'The Worm Eaters'" as JR noted. He has only one major scene later on, yet his inclusion in the background of this functional moment is part of Hooper's ongoing Robert Altman-esque creation of a community full of characters in The Funhouse.

Mick Garris: So, did you actually go out and cast freak animals?

"It was basically a casting call for animals that came out genetically strange."

"This short sequence between Amy and the two-headed cow has to be one of the purest, most fastidious constructions in Hooper's catalog."

I thought for the longest time that this cow's second face was a Craig Reardon makeup application designed by Rick Baker, and the cow was trying to shake it off. Not according to Tobe though, if all the freaks were truly hand picked authentic creatures of God. 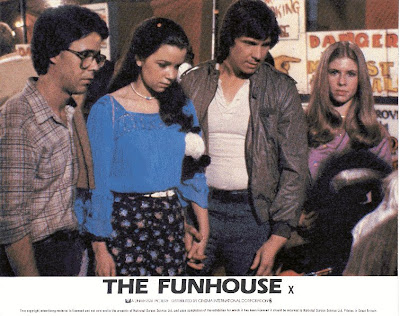 No, Largo! Don't look at the camera, we're taking a lobby card still of this scene!

"DANGER. Do not MOLEST the ANIMALS."

Disgusting subliminal foreshadowing, believe it or not. The cleft palates of the freaks are a big hint.

"What the hell is that?"

I was watching an interview with Rick Baker recently where he remarked he was more into creating characters than simply killing teenagers. It seemed kind of a swipe at professional competitor Tom Savini, although Savini did a great job redesigning Leatherface and his family for Hooper's own The Texas Chainsaw Massacre 2. Baker was the definitely the perfect choice to design the effects of The Funhouse since they're rooted firmly in mutation of the flesh rather than its piercing and mutilation. We've just been shown real freak animals, after all, and this handsome baby in a jar foreshadows similar mutants to come.

Amy's quiet bemusement in sight of these creatures is unlike any of her friends. Buzz and Liz, the more assertively beautiful young people of the group, are openly grossed out. Richie the nerdy joker makes a lot of jibes to show he's nonplussed, but his humor is distancing. Amy is actively fascinated with the perversity on (safe) display, reaching out to cows and circling this fetus in a jar with genuine curiosity for the strange unknown. Is she really, deep down, "The Bride of Frankenstein" as we earlier heard her television at home say?

"...It's just like the magicians do. It's probably made of rubber."

This is the first time of many one of Amy's friends will try to reassure her (and themselves) that any of the weirder elements during their night out are just a put-on. When the thrill of danger becomes even a little uncomfortable, they rearrange the parameters. Coupled with Beal's quietly moody tones, the ominousness in this scene is delicious.

"Buzz approached the platform where the jar stood and leaned close to it. He reached out, put a hand to the glass, slowly ran his fingers down across the front of the jar, beyond which rested the face of the monster. Abruptly he jerked his hand away. "Son of a bitch!"


"It's only a scratch. Funny, though, I didn't see any sharp edges."


"Maybe you didn't cut it on the glass," Richie said. "Maybe the thing in there bit you."
"It's dead."
"Its body is dead," Richie said, "but maybe its spirit is still alive."
"A minute ago you told us the goddamned thing was just a rubber fake," Amy said.
"I've been known to be wrong," Richie said.
"How do you explain it biting through the jar?" Buzz asked sarcastically.

- The Funhouse by Dean Koontz

The scene closes with a dissolve to the laughing fat lady, last seen in the opening titles as both the avatar of Tobe Hooper and logo of the carnival itself on Joey's bedroom door poster. The darkness which frames the creepy fetus recalls the opening titles opening/closing doors effect. The doll is shown again here for the first time in context of the film's story and also in connection to the fetus, taking on a slightly sicklier meaning as emblem of the exploited grotesque.
Posted by Unknown at 7:51 PM