William Finley is best known for the titular role in Brian De Palma's Phantom of the Paradise (1974) and his filmography includes other De Palma films like Sisters and The Fury. Tobe Hooper fans probably better know Finley for his hilariously deranged performance in Hooper's hilariously deranged Eaten Alive (1976) and another supporting role in Hooper's Night Terrors (1993)

The whole scene is essentially one long monologue by Willaim Finley encapsulating the most subtextual themes in The Funhouse at once.

By the way, Finley is credited in the film as "Marco" while in the last scene his tent clearly read "Marko," so forgive any alternations in this post. The character's name itself may be a reference to the 1965 film about Marco Polo, Marco the Magnificent, which featured hobbyist magician Orson Welles playing his tutor.

Live performance is a tricky balance between interaction and spectatorship, between performer and audience member. Standup comedians may speak to their audience conversationally, but there's no actual conversation. Carnival attractions must invite the illusion of interaction rather ruthlessly to draw and hold your attention, lest you keep walking. The illusion of interaction is utterly necessary and even taken for granted by the impetuous youth for whom a jaunt in a seedy carnival is a declaration of independence.

The carnival isn't a great place to try to assert yourself. The games are rigged, the roller coasters always follow the same track (unless you entertain thrilling possibility of breakdown) and magicians use "volunteers" from the audience more or less as puppets. Films humor a kind of personal involvement with their audience but their medium is further distanced than even the most jaded live performer - except perhaps horror and comedy films, the good ones of which tend to unexpectedly provoke.

The staging of this scene is easily the most plainly theatrical in the film. Hooper just likes William Finley, and lets us watch him. There's no functional plot purpose, it's a stand alone piece with a beginning, middle and end. Compared to the other carnival attractions Amy & Co. check out, this is absolutely their least participatory. What this scene really does is seat the film's audience next to the carnival spectators, if seeing the same mutant farm animals hasn't done that to you already.

I love Liz's mix of relief and disappointment. Already the scene has strayed from screenplay formulas by not involving the central characters. A less special movie would have had Marko choose Liz or Amy. Hooper places the camera in the back row of the crowd, a highly mannered way of bringing the audience into the room.

"Step into the coffin."

Magic acts don't usually put volunteers in supposedly dangerous situations. Old routines involving the illusion of cheating death, like sawing a woman in half, are usually done with lovely assistants. Marko's casual dance across that line of trust between performer and audience in matters of life and death is the scene's second quiet violation. Nothing's a clearer symbol of death than a coffin, and how willingly the mark enters the carny's web as Amy and her friends will deliberately trap themselves inside the funhouse later.

"Get a regular job."

These close ups maintain the theatricality of the scene, too. No extreme angles or short lenses - this view of Marco and volunteer would be close to the focal point of someone sitting in the front row.

The spotlight brings us into the crowd bleachers just a little more as the spotlight forces our focus. There's only two reaction shots of Amy and friends left in the entire scene, amazingly. The camera now begins to track forward at an almost imperceptible pace, slowly drawing us in.

I love how blase Marko is about taking a nip from his flask in the middle of his act. That and the cigarette are the perfect seedy counterpoint to his otherwise professional demeanor. Drinking after mentioning Vlad's name seems like he's toasting to his memory.

"Known as Vlad the Impaler, to his friends..."

Bruce F. Kawin's Film Quarterly essay The Funhouse & The Howling comments that Amy's little brother Joey learns how the horror genre is "connected in a meaningful way with genuine rape and murder in an unattractively perverse context." Tobe Hooper Appreciation Society author JR terms such iconography as horror "gentrified by yesteryear." The choice to make Marco the carnival magician a vampire with a vampiric set piece is a brilliant since Dracula is the sole contemporary to the film's heavily referenced monster Frankenstein, as evinced in Joey's room.

Marko's speech about Vlad the Impaler is the perfect reminder that even old dusty legend of Dracula used to have truly fearful resonance at one time, and the hecklers in the crowd are the voice of modern indifference.

"With that piece of history planted firmly in our mind,
I present without further ado..."

Even the hecklers are mannered in this film.

"And now without further ado, I present..." 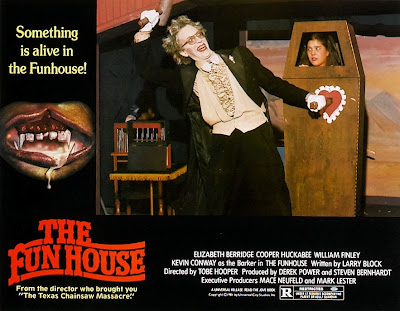 Finley made that demonic face for the publicity still only. In the actual scene, with cigarette held between pursed lips, he looks more like a union carpenter.

"Is there a doctor in the house?"

"Thank you for your patronage - "

"Next show in two hours."

The end of this scene is a double whammy. First of all, the whole thing was a ruse. The girl was Marco's daughter and no one was going to be picked but her. Even better, the act barely qualifies as magic! Yeah, she changed her clothes inside the coffin, but that's not the point.

The switcheroo tricks the audience at home exactly the same as the fictive audience in the scene, which is brilliant. William Finley is so disarmingly phony at the start, and only after locking the girl in the coffin does he start to command our respect with his seriously intoned origin of Vlad / Dracula, the importance of which is emphasized by Hooper's camera incrementally creeping forward.

When "The Impaler" routine seems to go wrong, all that seeming incompetence comes rushing back. The blood spills from the girl's mouth. Then she's okay, and everything's fine! People love being scared so long as in the end, it's just a big joke. Marco's trick is particularly insidious in that unlike the straightforward artificial danger of a roller coaster (or funhouse) or even the is-it-or-isn't-it real sickliness of that freak tent fetus, he used the audience's cynicism against themselves. It's such a great screw-you to those hecklers, but also the entire audience, which expresses a real hostility to audiences in general. He knows they'll nonetheless accept and applaud being jerked around since they finally got the thrill they paid for.

The panic of simulated danger suddenly becoming real is of course what the film rubs in our faces later inside the funhouse, and this scene is a jolting taste of things to come.

Finally worth considering is the father-daughter relationship of Marko and Carmella. Like so many real life circus and carnival acts, both his and the Girl Tent barker's attraction (and the Funhouse barker, as we'll see) are a family act that uses the younger generation as little more than a prop. Is the relationship of Amy to her parents more or less healthy by comparison? Show your work, allowing for the fact that Marko drapes his cape protectively around his daughter as they exit.

(Amy is watching The Impaler)

With a sickening, wet, tearing sound, the stake sank deep into the woman's chest.


Jenny screamed, and blood gushed from her twisted mouth.

The audience gasped. A couple of people cried out in horror.

Jenny's head slumped to one side. Her tongue lolled. her eyes stared sightlessly over the heads of the people in the tent.


Death miraculously transformed the face of the volunteer. The red hair turned to blond. The eyes changed from green to blue. The face was no longer that of Jenny, the woman who had walked onto the stage from the audience. It was now Liz Duncan's face. Every plane every hollow, every feature, every detail belonged to Liz. It wasn't just a trick of the light and shadows. It was Liz in that coffin. It was Liz who had been impaled. It was Liz who was dead, blood still oozing from between her ripe lips.


Having trouble drawing her breath, my looked at the girl beside her and was amazed to see that her friend was still there. Liz was in the audience-yet somehow she was also on the stage, in the box, dead. Confused, disoriented, Amy said, "But it's you. It's you...up there."

...Wow, movie novelization authors hate scenes that are only about the main characters and story on an abstract level. So do producers, which is why it's miraculous this scene was included. Then again, it's miraculous the whole murder-less first half of this ostensible "slasher movie" got to be that way.

Also of note is that Koontz changes Marco's vampire getup to that of a devil - but that's because Koontz ignored the horror business deconstruction of The Funhouse in favor of Christian symbolism. That's all another post for another day.
Posted by Unknown at 3:04 PM