Returning to Joey as a buttress between the escapades of Liz & co., we see him for the first time at an attraction which the gang has already been to; the carousel. He too reaches for the fabled brass ring, and in repeating his forebears, faintly joins the echo of heredity heard in the last scene from Marko the Magnificent and his daughter.

Like a lot of other people who probably first saw The Funhouse on the Sci-Fi Channel or Joe Bob Briggs' Monstervision, I didn't see this weed toking scene until years later. Unlike the toking in Buzz's car on the way to the carnival, it can be completely excised since there are no plot points being set up besides the fact that the kids are all getting stoned.

The fact that they're only getting stoned, then, makes Hooper's use of John Beal's score all the more hypnotizing. J.R. has legitimately criticized Beal's contributions as a bit overbearing at times, and I would especially agree with that so far as the "big" moments of the film - the deaths - not gaining anything from their orchestral flourishes. I think what The Funhouse does not gain from those later scenes, it more than makes up in what the quieter moments, like this one, gains from Beal's low-key cues. In this case, the same foreboding melody used when the gang inspects the deformed fetus in the Freak Tent. That was a creepy situation, but here we have - what? Some kids innocently getting stoned? The choice of musical cue refutes that innocence and insists that something ominous is happening, and indeed it is: as the night goes on, we the viewers know that we're getting closer and closer to "that world of darkness" in the funhouse, even if the kids don't. We're watching them impair their judgement in a consequential way that other slasher films don't make a point of: while Jason or Michael Myers might slaughter you shortly after your underage alcohol consumption or premarital sex, it's rare that the use of contraband be directly related to putting you within their actual stabbing distance.

One of the more strikingly casual observations in Bruce F. Kawin's singularly celebratory review of The Funhouse from Film Quarterly's Fall 1981 issue is his dismissal of  Richie as "selfish, dope-oriented and greedy." I had never really considered Richie as that bad a guy, but the more you think about it, the more responsible he is than anyone for getting his friends killed - and not just because it's eventually his brilliant idea to spend the night in the funhouse, but also because he really is dope-oriented and greedy. Holding for a moment on his reluctance to depart an unfinished joint is a perfect little character moment to underline his avoidance of reality.

Beal's spooky cue cuts off at the exact second we The Cobra and its mechanical whirring fades to the outside of Madame Zena's tent.

Madame Zena is played by Sylvia Miles, born Sylvia Reuben Lee in 1932 and best known as the wealthy woman who invites Jon Voight up to her apartment in Midnight Cowboy and gets all indignant when he asks for the money she didn't know he expected as a male gigolo. She was nominated for Best Supporting Actress at the Oscars that year, just for that one scene! She also appeared as a real estate agent in Oliver Stone's Wall Street and apparently reprised the role in 2010's Wall Street: Money Never Sleeps.

"Is a very serious business, for Madame Zena. But don't be concerned,
the aspects are quite wonderful for tonight."

Like Marko the Magnificent, Madame Zena enjoys a little nip 'o the old courage juice. At least she has the decency not to do it in the middle of her act. I'm pretty sure that's not coffee in the Funhouse Barker's mug, either. In any case, the mere swigging of a flask immediately casts aspersions on her hammy Romanian accent. Man, this carnival is just drenched in liquor and phoniness.

As Zena prepares to give the group their money's worth, Liz and Buzz giggle like idiots while Richie can't help making spooky sounds. Consider for a moment the analogous relationship between carnival performers and makers of horror films. Both are casting a spell which require on some level - just the bare minimum - a little suspension of disbelief. Every joker like Richie thinks he's being irreverent by mocking the theatricality of a fortune teller, or a Marko the Magnificent, or a Tobe Hooper - when in actuality their theatricality is intended only as an escape from mundane everyday existence, and to mock them is a statement of solidarity with normalcy. 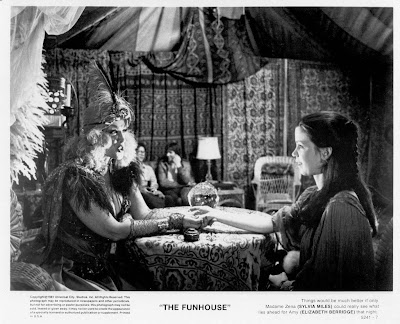 "Things would be much better if only Madame Zena could really
see what lies ahead for Amy that night." - publicity still caption

"Good. It means you were born...with a knowledge of the occult."

The Funhouse constantly plays upon the divide between the phony otherworldly and jaded youth who blithely consume the otherworldly as temporary escape from normalcy, yet the film's great irony lies in how true the ramblings of the phony dark side eventually turn out to be true, without either party even knowing it. The funhouse barker is right, there is no escape from the funhouse for Amy's friends, and Madame Zena is correct about Amy right off the bat - she is the Bride of Frankenstein..."born with a knowledge of the occult." What sister wouldn't be, with a little brother like Joey?

"Do you have premonitions that often come true?"

"Please, I need to concentrate."

"Three bracelets. That is good."

"...Springing from the mouth of truth."

More stock buttery showbiz lies with eventual truth - Amy will, as you might be guessing even as a first time viewer, be the only survivor of The Funhouse.

"Wait. Quite a break in the faith line. It makes sense."

" - Will enter and change your life."

"Do not mock the stars, my friend."

This is a bit more obvious of an inadvertently true fake premonition for first time viewers, although the tall stranger who changes Amy's life forever won't be tall and dark. He'll be albino.

Bruce F. Kawin's aforementioned Film Quarterly piece is also a review of Joe Dante's The Howling, which he considered the other most important horror film of 1981. Both stories incorporate "the book of the vampire" - an "unconventional, suppressed, or unpublished text." Kawin cites as examples from literature the governess's notebook from The Turn of The Screw and the "Necronomicon" from the works of H.P. Lovecraft, and from films the Scroll of Thoth from The Mummy or Caligari's notebooks from The Cabinet of Doctor Caligari. Essentially, anything containing forbidden knowledge about the forces of darkness.

Kawin's point is that what makes The Funhouse and The Howling such distinctly modern works for their time is that both use the horror film itself as "the book of the vampire." The Howling makes coy use of clips from The Wolf Man and The Funhouse from The Bride of Frankenstein as texts containing ironic hints of real danger to come.

I would add, as this blog has attempted to illustrate, that The Funhouse extensively uses carnival conventions as stand-ins for horror genre conventions. Coincidentally, what is the clip from The Wolf Man used in The Howling? Maria Ouspenskaya as Maleva the Gypsy-fortuneteller, warning in her hammy Romanian accent to Lon Chaney Jr:

"Even a man who is pure in heart and says his prayers by night, may become a wolf when the wolfbane blooms and the autumn moon is bright."

With Zena, we're now three for three on meeting the ramshackle equivalents of the posters in young horror fan Joey's room: Dracula / Marko, Frankenstein / Funhouse Frankenstein, and Zena / Gypsy from The Wolf Man.

"Hey, I thought she was reading her palm?"

"I have performed in front of crowned heads of Europe!!"

Like the Brass Ring on the carousel, this is another real life carnival detail which Hooper possibly remembered from his childhood, but is lost on modern audiences including myself: through indented floorboards, your average carnival gypsy can create the illusion of rolling their crystal ball across the floor using psychic powers. Beal does a little musical sting to punctuate the unreality, doubly effective for those who aren't hep to the trick.

Quite a counterpart to: