Neal Adams is a comic book artist best known for his work on Batman and other DC Comics superhero characters during the 1970s, during which he developed the funny underwear man adventures that had come before into a more photorealistic style to match the psychodramatic style the stories were taking. 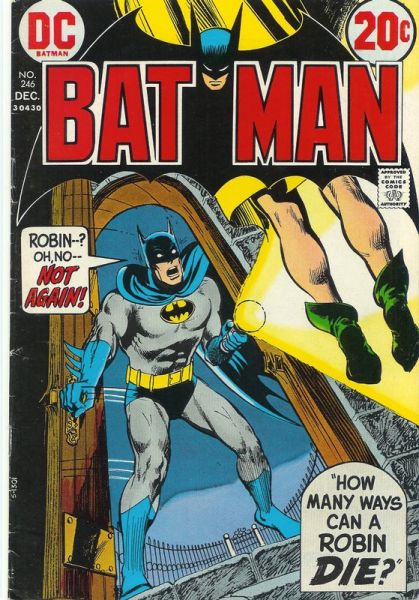 What's less known about Neal Adams is that like a few fellow comic book illustrators, he's done a little genre movie work over the years and one of them is our beloved The Funhouse! Some of his others have included Stuart Gordon's Dolls and From Beyond.


In 2004, a collection of his horror themed work including conceptual sketches for those films was published, titled appropriately enough Monsters. A tip o' the hat goes to the excellent horror blog Groovy Age of Horror for originally scanning these Funhouse related pages and letting me exploit his effort in this post.


Here's the first of the two pages: 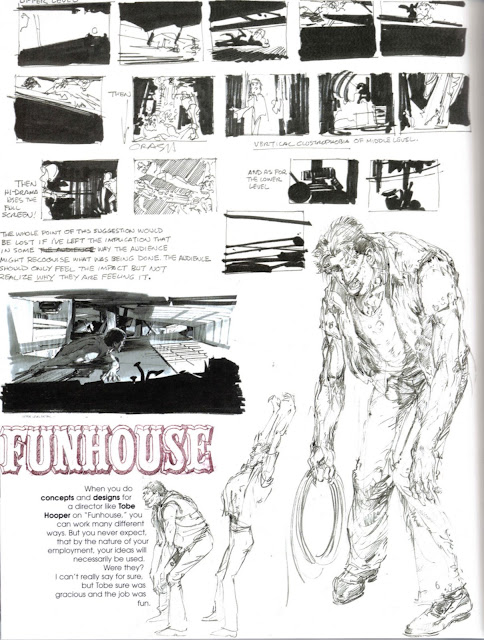 Neal Adams: "When you do concepts and designs for a director like Tobe Hooper on "Funhouse" you can work many different ways. But you never expect that by the nature of your employment, your ideas will necessary be used. Were they? I can't really say for sure but Tobe sure was gracious and the job was fun."
So, I guess Adams didn't see the finished movie?
Hooper has said before that Larry Block's script was offered to him, as opposed to the story being an original idea of his. Here Adams' conception of the unmasked monster looks nothing like the final product, so presumably the monster's appearance was left somewhat ambiguous in the screenplay and Hooper was fishing for ideas from different artists as to what would be behind the mask. This version of the monster's hulking figure does suggest the Karloff Frankenstein, but even the Frankenstein connection to the film could have been a stylistic addition to the film not present in the original script.
Neal Adams' idea for the monster has kind of split features; stitches running horizontally across the face below the nose with the lower half being the more deformed, especially the mouth. The ideas of a monstrous mouth and cleft face certainly made their way into the final design for the monster's face, albeit in very different ways.
Unfortunately the details of the storyboard thumbnail atop page one are a lot harder to make out. Neither JR nor I can really make out what's happening, although the giant gears from the basement climax can be seen on the right-side bottom row.
Between the unused Monster design and storyboard thumbnails is a more legible illustration of someone clinging to a wall for dear life below a seemingly bottomless shaft. As seen on the next page, Adams clearly was inspired by the idea of laying out the funhouse building level-by-level and creating a sense of vertigo by trapping the kids between floors. 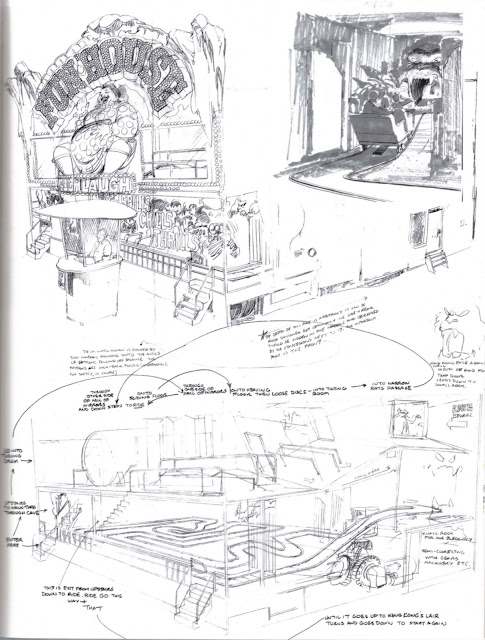 In case Adams is reading this I can tell you that at least two ideas of yours were incorporated into the film by Tobe: the laughing fat lady design and the big gorilla mouth into whose open mouth the ride cart tracks down. Also, the words CHILLS, THRILLS and SPILLS emblazoned along the front of the pavilion can be seen in the film.
Seeing a side view of the funhouse is almost shocking - in the film Hooper takes great care not to show anything but the front, which really helps the inside feel like a parallel universe later. Adams' sketches here have the ride track completely thoughtfully laid out, something which the film never clarifies. Although the film's funhouse could conceivably have an upper level, I never got the impression that the ride took place on more than one floor and Adams' upper level seems to be additional waiting line room.
The office, a location of crucial importance to the film's story, seems to be located in the back by Adams. Given that the kids witness events in that room from above rafter in the actual film, however, the office comes off as more of a basement location with the mechanical room of the final climax as a sub-basement. Either way, the labyrinthine effect of the funhouse in the final film nullifies the careful architectural designs seen here, but one can clearly see where Neal Adams' ideas otherwise found their way into the production design.
Neal Adams isn't as surprising a name to see on The Funhouse as Mark L. Lester's, but Hooper obviously knew talent when he saw it during the pre-production period.
Posted by Unknown at 9:46 PM